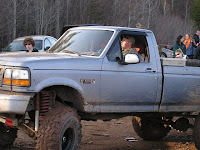 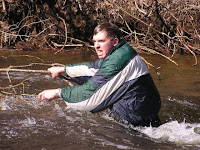 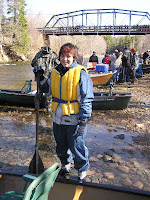 Pollett River Run 2008.I was looking forward to the Pollett River Run this year. George, an experienced canoe man, with two of his friends wanted to hit the Pollett. Brianna being 16 years old, I felt that she was old enough to experience the Pollett River Run for the first time. The last Saturday of April arrived, which for the past 25 years, is the day of the Pollett River run. The timing was good because the river was high, it was 10 degrees, and I was recovered enough from the cold I was battling to make the trip.George left his van at the takeout on the Sanatorium road. My jeep and the blazer carried us and our gear to the put in at ElginWe skipped the traditional breakfast at the community hall and opted for an early start. We set sail around 09:30 A.M.George has a loud voice that carried half way down the river. He told joke after joke to people 150 yards away. Brianna and I laugh our heads off for many hours of this day. George kept us entertained for sure.

George was not only a good joke teller and canoe-men, he was good at rescuing. One guy about 50 years old in a rubber boat hit a tree that was leaning across the river. He found himself in fast deep water holding on to the tree not wanting to let go. George got out a throw line and after a second attempt landed the line near enough for the poor man to grab hold and pull himself to shore. He was almost crying in fear and that he lost everything. This was a bad way to start the trip because this tree is only about 5 minutes down from the put in. This tree caught many people off guard especially the rafts that could not manipulate around this outreached tree.

About 2 hours into the run, I forced Brianna to take the stern. With a little teaching and practice, she quickly learned the tricks of the trade and guided us through the rapids, around rocks and bridges like a pro. We never did flip and she save our ass by having her paddle in the water. We hit a side current which nearly knocked me out of the canoe and nearly flipping us but she had her paddle in the water and I felt the force or her counter action stable the canoe. I though for sure we were going for a swim. I had people upstream say “ooooooo close one”

After about three or four stops along the way we came to a water falls on the river right. We pulled the canoe in on river left for lunch. This was a great spot for lunch for there was a big dry field sheltered from the wind. The sun without the wind felt warm and we enjoyed many laughs with these first time canoe partners. George proved himself to be a great outdoor cook as well as a canoe men, joke teller and rescuer. The salmon he cooked was incredible.

After lunch we nosed our bows into the current and headed down river. We stopped at a camp where many people were socializing. A canoe came down the river and didn’t make the turn. It hit a rock and dumped its cargo and passengers into the cold water. One girl had trouble getting to shore. Brianna had to go help drag her in. After looking at the injury, it appeared her leg was broken. After getting her comfortable and knowing there were many good people there to help, we once again pushed our canoe to the rapids and continued our trip.

Brianna navigated her way down stream to the takeout on the Sanatorium road. At the takeout, there were about 1000 people partying. The major event was the mud bogging. Big truck and 4 wheelers cracked their engines wide opened through the deep mud holes. Much of the field was muddy so there were drunken people slipping and doing face plants.

It was about 07:45 P.M. when we finally got back to Riverview. We unpacked and sorted the gear and bid farewell to our canoing partners.

Brianna missed her soccer tryouts but she had a good time and was tired so she jumped in the shower and shortly thereafter headed to bed.

It was Brianna’s first voyage of type. Hopefully there will be many more and hopefully she will cherish these trips like I do.