Itinerary was fish Crawford stretch Aug 1- Aug 3 2016 then of to Ground Hog Landing Stretch to fish Aug 3 to Aug 5. 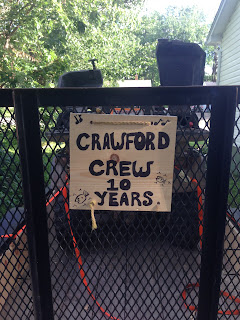 I left Cape Breton to returned home to Moncton just in time to get ready for our fishing trip to the Miramichi on Aug 1 to Aug 5 2016. There was some prep work like co-ordinate the supplies, put the sides on the trail and repair the dry bags. My wife Sylvia made the Crawford Crew 10 year anniversary sign for the back of the trailer. This sign was to remind us that me and my three great friends Denis, Aaron, and Chad have been doing remote fishing trips for 10 years. We jokingly called ourselves the Crawford Crew because the Crawford Stretch is where we did our first remote trip 10 years ago. Somebody was looking out for us when on our 10th anniversary we were able to go back to the Crawford Stretch as this stretch has to be won in a government draw.

I stopped at Escape Anglers in Riverview, N.B. for some flies the day before but the boys wanted to keep the tradition of stopping at Trout Brook Fly Shop. I bought a fly line because I didn’t like the orange one I had on. I was thinking that the orange line had something to do with my low catches I had since I bough it.  My suspicion were reaffirmed when I seen an underwater test some big outfit did and the result was the line was much more visible which could distract fish from the fly.

Reunited at the Crawford Camp Pool.
We arrived at the Crawford camp at 2pm. We reunited at the Crawford Camp Pool which is where we first started fishing together 10 years ago. We took some pictures and clinked our beer cans together to toast our 10 year anniversary. We unloaded our gear then drove our ATVs 10 km to the warden’s camp to get our camp key that was missing. The warden camps sits on the banks of the spawning ground so we looked into the water and seen many nice trout and salmon. Only the maintenance workers were there so we did not get the camp key. This was no biggy because we are so far in the woods that seldom anybody drives by.

A beautiful evening fishing.
We returned back to the camp and enjoyed a chile supper that Sylvia my wife sent with us. At 7pm we went fishing. Denis and I went to Split Rock Pool and enjoyed a great evening of fishing. We had many salmon go for the fly and ended up hooking 6 salmon(grilse) and landing 2 each. Denis also caught a nice 14 inch trout. We kept the trout but the salmon was catch and release. The weather was perfectly comfortable with not many flies. Few evenings have I spent with such great fishing and perfect comfortable conditions.  It is a terrible thing not to be thankful so Denis and I both felt blessed and thanked God for providing this incredible evening.

On the banks of Split Rock Pool there is a lean-to shelter with a big stone fire pit in front. Signatures and recorded salmon counts engraved into the walls gave testament that this shelter dates back to 1962 and many great fishing evening were had. As I read the historical engravings it seem to tell a story of 50 years ago. I wondered did the guys that stayed here have as much fun as we had. I suspect that some of the people that stayed in this lean to shelter have passed away or is no longer able to fish. Do they still think of the great evening they once had here? If their health allows do they come back to reminisce. Don’t they know that this place misses them?

In the mean time Aaron and Chad went to Black and White Pool and caught one grilse each.  Chad had a big salmon on but lost the battle. Man these big salmon sure do fight hard.

The rest of the evening was spent celebrating our 10 year anniversary drinking Glen Breton Whiskey, beer and eating more chile.

Day 2
Denis removed his waders from the wader rack and the camp key fell to the floor as if it were dropped to us from God. Perhaps a sign that somebody was looking after us.

Denis and I were fishing at 6:27a.m. at Black and White Pool and fished to 8:54 am. Denis caught a grilse.  After leaving Black & White Pool Denis and I stopped at every named pool on the stretch. We were exploring and not fishing much. The low water conditions rendered most of the pools only a foot deep. Even the bridge pool was low but the Black and White and Split Rock Pool provided all the great fishing we needed.

Day 3
We were fishing a bit after daybreak. More salmon grilses were caught. This was the last day at the Crawford Stretch before we moved to Ground Hog Landing. Instead of taking the time to pack everything tight I decided to make room on the trailer by driving my ATV 26 km to the next camp. The Crawford stretch treated us good but we knew Ground Hog Landing may not be as good because of the low warm water condition.on the Sevogle River.

We arrived at the Ground Hog Landing camp and was eating supper when I said,  “man I wish it would rain.”  30 seconds later it clouded over and it started pouring. Aaron and I washed up under the down pour then the 4 of us went fishing. Aaron caught a nice grilse on his second cast at Peabody Pool.

The evening was spent eating one of the great meals that Chad cooked up. If memory serves me correctly, it was a steak night. 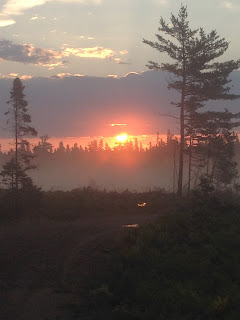 We got up at day break and went fishing. We enjoy a glorious sunrise on our way to Peabody Pool.

I caught a grilse in Middle Pool mid morning. A grilse is an Atlantic salmon which has spent only one winter at sea before returning to the river. Salmon grilse are often indistinguishable from multi sea winter (MSW) salmon except by scale reading.

Like most fishing trips we fish early morning return to the camp around noon, have dinner then sleep for a few hours in the afternoon. We are usually up until 3a.m. telling lies so if we want to enjoy the day we have to catch up on some sleep sometime so we sleep during the afternoon because the fish are less active. After catching up on some sleep, we then go fishing until dark. The evening fishing paid off for Denis because he landed a nice grilse in Middle Pool.

The night was spent eating great food and having a few cold ones and playing guitar and trying to sing.  Denis being smart went to bed around midnight, but Chad, Aaron and I went outside and watch the stars, told jokes and drank some whiskey until 3:00 a.m.. Getting up early to go fishing was a bit painful. 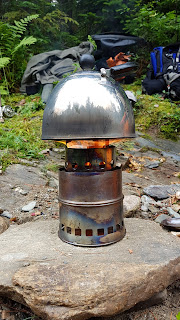 A Similar stove can be purchase  by going to the top of this post.

We were up again at 5a.m. and off we went fishing. We broke from the routine of fishing to light my wood rocket stove to boil some water to cook up a few meal packs. The meal packs come in all sorts of flavours and they are both tasty and filling.

Chad is no stranger to a fishing rod but the low warm water and very small time slot the fish were taking caused Chad to get skunked on the Ground Hog Landing stretch. He caught 3 or 4 grilse when we were on the Nor-west Miramichi Crawford stretch so it was not so bad. We all take turns getting skunked so there is no shame in it but we like to trash talk each other about it just the same. 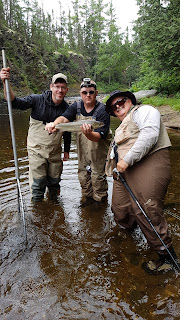 Leaving is never easy.
You would think 5 days would be long enough to spend with 3 other stinky guys but sadly we had to turn our trucks towards home. These great times we have on our remotes fishing trips are reserved for only those who know.

You can purchase the rocket stove by following the link below.